A man who was caught with human flesh has made a shocking confession that has left many people completely flustered. 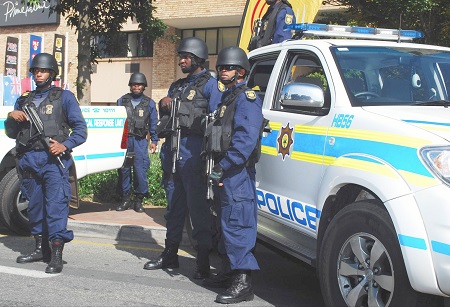 File photo: South African police officers
According to Daily Sun SA, a man who was found in possession of human parts allegedly told Escourt cops he was “tired of eating human flesh”.
Escort Cops spokesperson Colonel Thembeka Mbhele said the suspect walked into the Estcourt cop shop on Friday night and confessed to the cops on duty.

“When he was questioned, he produced part of a human leg and a hand. Further investigation led police to a house in the Rensburgdrift area in Estcourt where police were met with a foul smell, and more human remains were found.
“A second suspect was also arrested in Estcourt. A third suspect, who is a  Sangoma (herbalist), was arrested in Amangwe area where more body parts were found.
“It is alleged that the suspects raped, killed and cut up the body of a woman, which they then ate. The allegations by the suspect are that they would rape and kill the victims before they could cut them into pieces and eat their parts,” said Mbhele.
She said police were still investigating if there are other people who had died at the hands of the suspects.
“We urge those who have family relatives missing to come forward so that samples can be taken to perform DNA tests,” she said.
A source said there were suspicions that the three may have violated graves as well.
“They face rape, murder and charges relating to possession of human tissue,” said Mbhele.
Ward councillor Mthembeni Majola said he could not believe his eyes when one of the suspects led community members and police to where the body of a women was buried.
“It was buried under big rocks and we had to call a TLB machine to remove the rocks. They showed us the body parts in one of the houses. They admitted that they were waiting for the body parts to attract maggots. Apparently maggots collect money for them.”
He said a community meeting had been called for today.
“There had been a lot of rumours that foreign nationals were the ones killing people. None of those arrested is a foreign national. As community members we need to discuss how we are going to deal with this. We have also called izinyanga to the meeting. They need to distance themselves from this,” he said.
Majola said the meeting will be held at Esigodlweni community hall.