Ten people have been confirmed dead after two commuter omnibuses crushed head on at the 59 kilometre peg along the Harare – Nyamapanda road on Monday evening.

Witnesses told ZimEye.com that the two omnibuses crushed head on after one of the drivers tried to overtake another vehicle at a blind curve crushing head on to the oncoming mini bus. 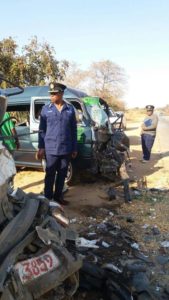